This is the second of two recent ATCs for All swaps that I signed up for.  It was the Foreign (non-English) Language Collage Cards swap, and the idea was to use foreign language book pages as the background.  All else was up to the designer.  For all of these cards, I started with a page of text that I colored with watercolor.  Then I cut out random pieces to lay on top of it, and colored those a different color and outlined them with a watercolor pencil.  For each card, I drew a different image that reminded me of the country where the text originated.  Then I found various images online and printed them either on copy paper or vellum, cut them out, and arranged them on the cards.  Some of the extra images are drawn or stamped, but most are printed.  Since this was a collage theme, I didn't see any issues with cut-and-paste.  I added some colored pencil in a few places to bring out the color in the images.  The last thing that I did was to add a focal piece of text that says "Earth" in each language, at least as close to it as I could get by using Google Translate and searching the interwebs.  That's just about it!  Here are the cards. 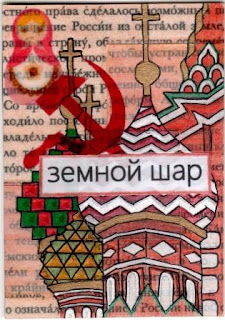 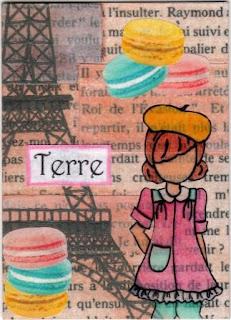 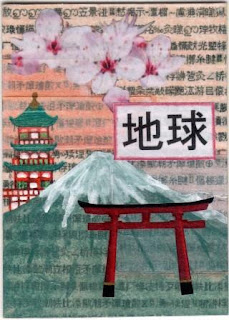 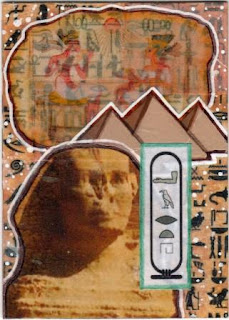 Thanks for stopping by!
Posted by Lisa Hicks at 12:49 PM No comments:

I signed up for a couple of trades on ATCs for All so that it would force me to do something creative.  This is the first set, which was the ATCoins Series: Monochromatic (Brown).  It's actually a mail art swap, which is something I don't normally do, but it was fun to try something different.  Speaking of trying new things, I drew all of the images for these from reference photos.  I'm relatively pleased with how they came out, so I guess it's all cool.  Ha!  For some reason, I decided also to stick with a "Texas" theme.  The backgrounds were all done in the same way, with many layers of distress ink and watercolor, and splatters of brown acrylic here and there after the drawings were done.  Before I started the drawings, I put down some watered-down white gesso on top of the backgrounds so that the images would show up better.  I sketched the main images first in pencil, then I did a light watercolor and went over that with colored pencil.  Here are the coins. 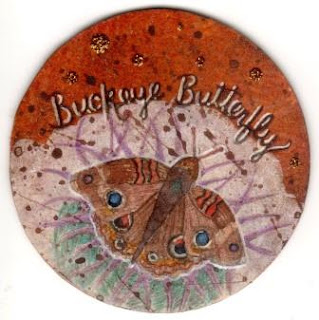 I've seen these in our yard, but they are "flittery" and really hard to catch in photos. 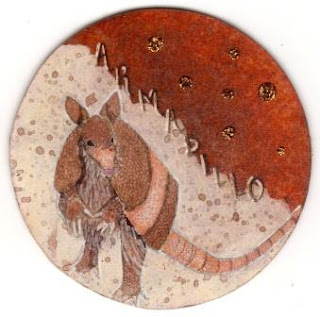 This freaking armadillo makes me laugh every time I look at him.  He's all hairy and ready to scrap.  Ha ha ha! 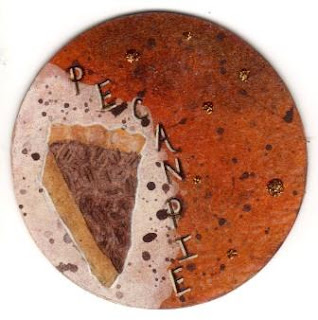 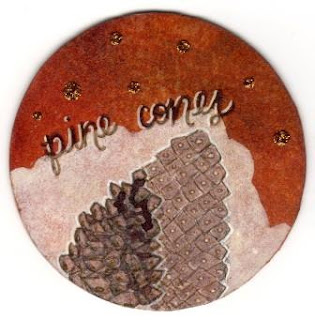 It took me forever to figure out how to depict an open pine cone.

Thanks for stopping by!
Posted by Lisa Hicks at 12:27 PM No comments:

This is the first of four swaps I've signed up for lately.  These were done for the Dragons swap on ATCs for All, and they were challenging for me, because I don't really "draw" that much.  I want to improve my drawing ability, and I thought this swap was good motivation.  I enjoyed trying to get the poses right.  In the end, they turned out almost like I wanted them.  All of these cards were sketched in pencil first, drawn over with a Micon 01 pen, and then colored with Artist's Loft Sketch Markers and/or colored pencil. 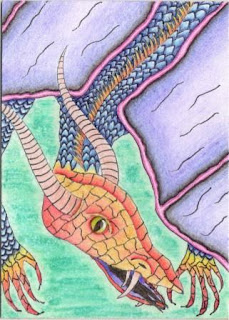 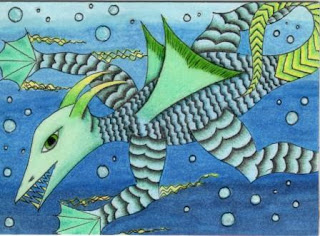 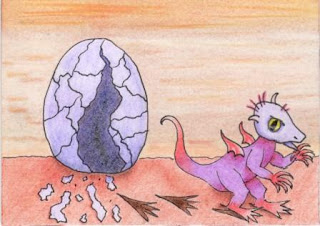 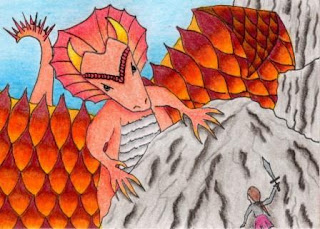 Here are my cards for the Bookworms ATC Swap on ATCs for All.  The theme was books, obviously, and I took that a few different ways. 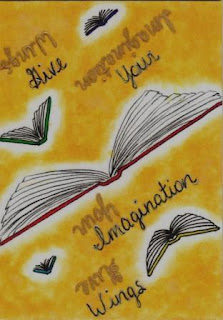 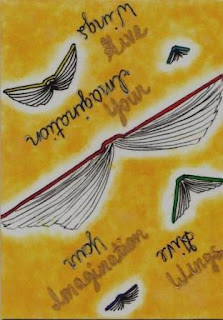 Imagination Wings
This is the first card I created.  The first thing that popped into my head was flying books, for whatever reason, so I drew it up pretty quickly.  I used a pencil to sketch it out then went over it with a Pigma Micron 01 pen.  The books I colored using some random markers, then I went over them with a Copic atyou Spica Micro Glass Glitter Pen.  You can't see it here, but the book bindings sparkle a little.  Instead of putting in the background first, which I should have done, I went over the background with Scattered Straw distress ink on a cotton swab.  It came out OK, since I wanted the books to "glow."  Then I decided that the card looked right either way I turned it, so I wrote the sentiment both ways, one way in gold and one way in silver.  The silver was a little bit light, so I went over it with my Micron pen. 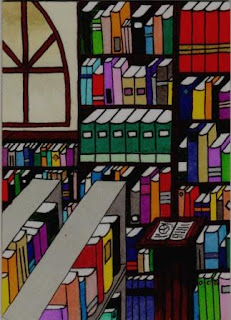 Library
Here is the second card.  When I started it, I didn't realize how many...um...lines it was going to require, but I stuck to it and ended up liking the result.  I sketched it with my pencil then went over it with my Micron 01 pen, as I did with all of the cards.  Most of the card is colored with Artist's Loft Sketch Markers (various colors), but I did use some Sharpies and Tombow colored markers or whatever else I could find.  There were a lot of books to color!  Then I used my Copic glitter pen to draw a "sunbeam" from the window to the book on the wooden stand, but you can't see it very well here.  It's subtle, even on the card in real life. 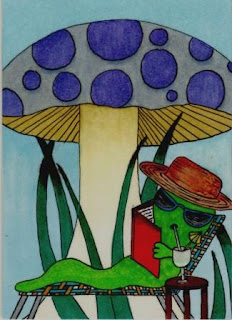 Staycation
I decided that this little bookworm was going to chill under a mushroom, so here he is.  He makes me laugh, so I think he's my favorite.  After drawing him, I used my Artist's Loft markers to color him, along with a few other random markers.  I used my white Gelly Roll pen to put in some details (not many), and I used Judikins Diamond Glaze to add shine to the sunglasses and drink glass.  I think he's enjoying himself. 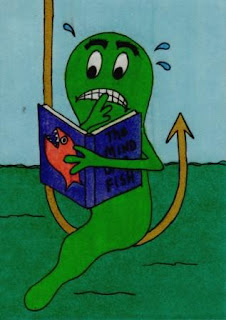 Mind of a Fish
This little guy is stressed, but I'm sure he managed to get out of this sticky situation.  He's sketched with pencil, lined with Micron pen, and colored with Artist's Loft markers.  The hook is done in gold marker, but you can't really see the shimmer here.

I enjoyed having to think about what I was going to do with this theme, and the cards were fun to make.

Here are some ATCs that I made for the Autumn Goodness swap on ATCs for All. 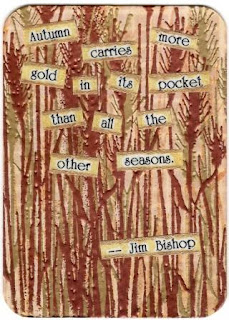 Wheat
For the background on this one, I covered the whole card with Antique Linen distress ink, then I used a Tim Holtz "Linen" (TH5061) layering stencil with Tea Dye and Vintage Photo distress inks.  I thought this looked too prominent in the background, so I went over the whole card with diluted gesso.  Once everything was dry, I used a Hero Arts red rubber Tall Wheat stamp (K5517) with Spiced Marmalade distress ink.  That sorta fades into the background, but you can tell it's there in reality.  Then I used Ranger Watermark Resist ink to stamp the wheat again, and this time I used Ranger Detail Embossing Powder in Gold and heat-set it.  After that, I repeated that process but with Ranger Detail Embossing Powder in Copper, offset a bit from the gold impression.  The details of how I put the quote on are below, since they are the same for all of the cards. 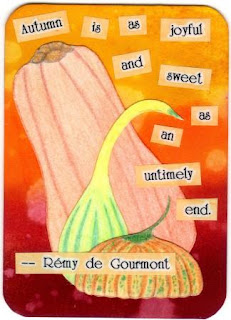 Gourds
The background on this one came first.  It's just a pretty simple blend of distress inks, from what I can remember bottom to top, Aged Mahogany, Fired Brick, Spiced Marmalade, and Fossilized Amber.  Then I dribbled some water onto the whole background, let it sit for maybe 10 seconds, then dabbed it up with a towel.  For the focal point, I'd originally thought I'd do a pumpkin with some jute for vines, but there were so many pretty fall squashes and gourds, I changed my mind and decided to do three of them.  Because the background came first, I drew and used colored pencil on each item on a separate piece of cardstock, then I glued them down with Mod Podge.  The details of how I put the quote on are below, since they are the same for all of the cards. 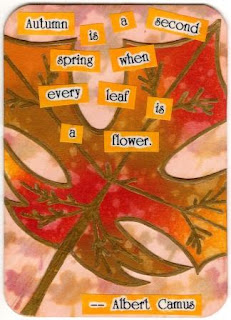 Leaf
OK, the background on this one is way more elaborate than it needed to be, but again it came before the main design idea.  First, I put down some Scattered Straw distress ink on the whole card.  I happened to have a piece of a negative from a Silhouette leaf design cut, and I used it to put down some distress inks on the background (Aged Mahogany, Fossilized Amber, Frayed Burlap).  Then I went over the whole background with diluted gesso.  On a separate piece of cardstock, I drew a larger version of the leaf and outlined it in gold pen (Sharpie Gold Metallic).  To "mask" the outline, I went over it with a Sakura 3D Glaze pen in clear and let it dry.  Then I used the same distress inks as on the background for the large leaf, dribbled some water over them and dabbed with a towel.  I glued the large leaf down with Mod Podge.  The details of how I put the quote on are below, since they are the same for all of the cards. 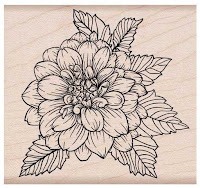 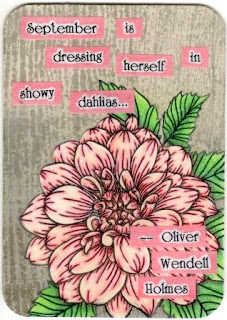 Dahlia
This one is my favorite.  I looked up fall flowers and found that at least some dahlias bloom in fall, and I just happened to have a Hero Arts Artistic Dahlia stamp (K6214).  For this card, I wanted a different color scheme, so I found a gorgeous dahlia and used colored pencils that are similar.  You can see here that shading and blending make a big difference.  Once the coloring was done, I masked the flower with a full-stick Post-It and diluted and applied three different grey acrylics horizontally, the idea being to create an ombre effect.  I had a Prima wood grain clear stamp (#961930) which is slightly smaller than an ATC (2.5 X 3.5 inches), but I made it work for the texture on the background.  The details of how I put the quote on are below, since they are the same for all of the cards.

The Quotes
Because this is an autumn-themed swap, I looked up some autumn-themed quotes.  They are printed with my Brother P-touch PT-D200 label maker.  That part was easy, as was the sticking down part, since all I had to do was peel off the backing and press it down.  For all of the quotes, I used a diluted acrylic paint wash over thin layer of Mod Podge (to make the paint stick), then I scratched the paint off of the words so that they are more visible.  I added another thin layer of Mod Podge to protect the paint.  On the Wheat card, I lined the tops and bottoms of the words with a gold pen.

That's about all, y'all!  Thanks for taking the time to read this!